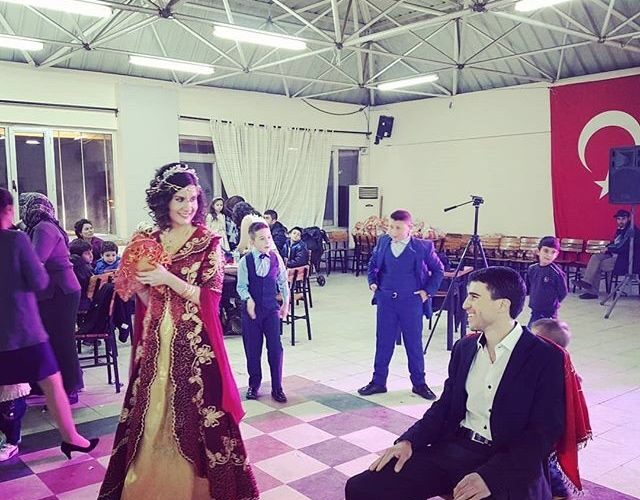 I’ll be the first to admit that once upon a time I had no idea how much privilege I held while traveling as a white American. In my mid-20s, I took my first job overseas in Ireland, and from there moved to Germany, South Korea, and Turkey, never once facing any major issues with a visa or uncertainty about being able to enter a country. When my college roommate visited me in Ireland, the customs officer joked with her, issuing her a tourist visa far exceeding her week-long trip, with just the explanation that she needed a little extra time to find an Irish husband.

Four years later, I was in Turkey, hanging out with a cute Turkish coworker who would become my husband. We went on our first date (though neither one of us knew it was a date) and then left the next day for a weekend trip to the town Kaş with a group of our friends, all Americans apart for Hüseyin.

Off the coast of Turkey, there is a small Greek island that our friends were all excited to see. For the Americans, it was no big deal – present a passport, get a stamp, get on the boat, ta-DA! But naturally, for the sole Turk in our presence, it wasn’t that simple. Hüseyin would have needed to do an entire visa application just for those few hours spent in Greece, and so he left his passport behind. Me, having a sneaky little crush on the guy I may have just been on a date with, left my passport at home too, so we had to spend the day just hanging out at the beach, swimming with sea turtles. It’s probably no coincidence that we finally had the, “I like you,” “Hey, I like you, too!” talk that same evening.

It should have been telling that our relationship began with visa inconveniences. They’ve been a recurring theme over the last few years. Below are a few of the lessons we’ve learned, along with our experiences to support them:

1.Don’t book flights together unless you both have your visas figured out.

In the summer of 2016, when we were living in Turkey, we started planning a trip to the UK to go watch my high school orchestra perform in Scotland and then swing down to London to see Harry Potter and the Cursed Child. Naturally, I didn’t need a visa again, but Hüseyin definitely did, and it was quite an involved process. After he got the news that he had passed his interview and would be granted a visa, we celebrated by booking flights, based on when we expected to receive his passport back from the visa processing office. Mistake number one. Because of an extended holiday in Turkey, his passport didn’t arrive in time and I ended up flying alone. Sure, we reconnected a few days later, but it was a slightly expensive mistake! 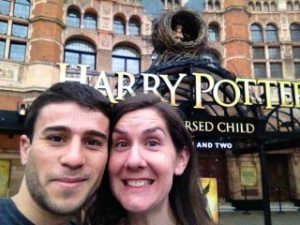 Happy that we both made it to London in the end.

2. But seriously, don’t book flights unless you both have your visas figured out.

Later that summer, we tried for a second visa to attend a friend’s wedding in Germany. This process was more complicated, as the application required a copy of our flight arrangements. Well, there goes my first rule out the window. I booked the cheapest flights I could find, only to ultimately face rejection. Because we were in the process of moving to the US, we had both quit our jobs at the university where we worked. While no one was concerned that I might overstay my visa in Germany, Hüseyin’s lack of a job didn’t look good. Our relationship and pending fiance visa to the US meant nothing either, as we weren’t married (like, surely, a massive check to USCIS is evidence of a relationship, right?).

3. A fiance visa is no joke, despite what reality TV may tell you.

From the time that we began the K-1 visa process to the time that Hüseyin arrived in the US, the entire ordeal had taken about 6 months, though I hear that the process is taking longer now. While we went through the first part of the process together, assembling massive stacks of paperwork together on our small kitchen table, by the end of it we were separated by an entire ocean.

My work visa expired before his interview date was granted, so after getting stress-induced tonsillitis, I took off for the US. It’s worth noting here that I left a couple months prior to the 2016 election, and we had zero concerns about the election results impacting our application. As it turns out, the timing of his interview (late November) was incredibly lucky – by the time his sister was applying for a tourist visa to come attend our wedding reception, no one in the embassy with her was being granted a visa.

But I digress – if anyone reading this has ever watched “90 Day Fiance” and come away from it thinking that that is based in reality all the way, let me set the record straight. There is no “deciding whether or not to get married” within the 90 days after your partner enters the country – that ship has sailed! It sailed roughly the moment you mailed off your massive folder of paperwork and hefty check. I can’t imagine anyone enters into this decision lightly. And no, I’m not saying that all of the couples on “90 Day Fiance” are real and sincere and 100% relatable. I’m just saying that when they contacted me on Twitter to apply for a spot on the show, it didn’t take more than an episode (though I definitely watched more than one) to realize it wasn’t a good fit for us.

Check, double-check, and then check again just to be sure. Once Hüseyin got his K-1 visa (and we waited until it was in his hands this time), I immediately started shopping for flights. Since he would be traveling in December, I tried to find the most direct connection possible, to avoid being delayed by the weather. It was also ideal to have his Port of Entry to the US be in Detroit, since if anything went wrong I’d already be at the airport waiting to pick him up. I already knew that it would be problematic visa-wise to have him fly through Germany or the UK, so that left our only viable option as Canada. “Good old Toronto,” I thought, “Sure, I’ve missed every connection I was scheduled to make there, but at least he’ll be close and Canada is friendly.” Well OMG how wrong could I be? As it turned out – and I only learned this by hearing of someone else’s experience second-hand – Turkish citizens need a transit visa to fly through Canada. And it wasn’t a formality, like pay a fee and then print off your visa – it was a trip to the embassy and an interview and the whole nine yards just to hang out in Toronto for 2 hours and not even leave the airport. 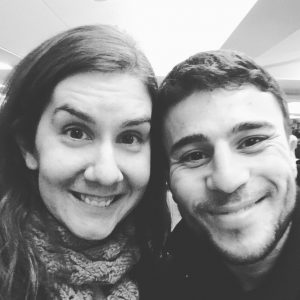 After a lot of hassle, finally in the US!

5. Definitely weigh the pros and cons of getting either a fiance visa or a spousal visa.

After all of our pre-marriage visa ordeals were over, we got married and then began the next leg of the immigration journey. The deal with a K-1 visa is that after you get married, you apply for Adjustment of Status, which is another stack of paperwork and another fat check. You can also apply for Advanced Parole and Employment Authorization at the same time, so that you don’t have to wait quite as long to be able to travel outside the country or get a job. While it doesn’t take as long to get these two things as it does to get the Green Card, it does still take long enough that it can be very challenging for many newlywed couples to have one partner struggling to adjust to a new country while also being unable to work. Obviously, situations vary from person to person and couple to couple and the K-1 was the right choice for us, but it’s worth noting that with a spousal visa, the non-citizen partner is able to work immediately, if you’re into that kind of thing.

6. Sometimes book flights without having your visas figured out yet.

Okay, surely you know from reading numbers one and two that I actually hate this piece of advice and don’t really recommend it. But sometimes circumstances require a leap of faith, even if it causes so much stress that you get a shingles outbreak on your eye (true story). When December 2017 rolled around, Hüseyin hadn’t been home in a year, and his entire family had missed out on both our wedding ceremony and our reception a few months later. We had been planning and promising to come have one in Turkey, but with our work schedules (and tight budget from being a single income home for so long), it took awhile to make it happen. We finally both got time off for 2 weeks in December, and – no joke – a day or two later, the US and Turkey mutually banned tourist visas to citizens of the other country. Basically, if I had already had a visa, I would have been fine, but no new visas were being issued. Period.

We played the waiting game, I set up a Google News alert, and every day I read everything I could find about the visa ban, while working through a fun bout of stress-induced shingles. When the ban was lifted, about two weeks before our days off began, I began the process of applying for my own visa online. It was a lot more complicated than visas were prior or are since – I had to prove basically everything that the US asks its visitors to prove. It was like getting a taste of my own medicine, so I get that and definitely don’t think I’m a victim here. The scary part of the application was that I had to upload my flight documents before I could even see when the first available interview appointment was. After a lot of hemming and hawing, our flight was booked to depart on December 16th from Detroit. And as I clicked to the final screen, I finally saw what I’d been waiting for – the next available appointment for my visa interview: December 15 in Chicago.

Here’s the thing: in the end, it worked out for us. We’ve had some glitches and hiccups, but we’ve never been parted for long, and no one is actively working to keep us from being able to be together. When the Muslim ban happened in early 2017, I was relieved when Turkey wasn’t on the list – and then immediately felt guilty for that relief. Other families were hurt by that ban, and other families continue to experience separation struggles to this day. As we acknowledge our challenges, we remember that we still benefit from a great deal of privilege. 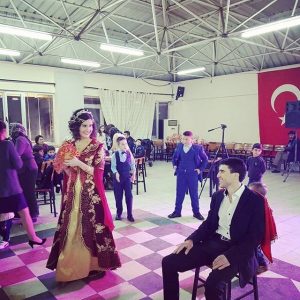 Finally celebrating our wedding in Turkey

Have you had similar travel issues? Can you relate to KC and Hüseyin’s story? Let us know in the comments! 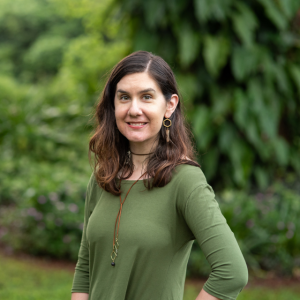