* Scroll to the very end for our hotel, sightseeing, and car rental recommendations! *

Toto, we’re not in Kansas anymore. That’s what raced through my head as I opened the door to our bathroom in our hotel our first night in Costa Rica. The cute little boutique hotel near the airport, Terrazas de Golf, was clean, spacious, and quite pretty, so I had no qualms about staying the night there before heading to the volcano region the next day. Until I opened the bathroom door, and saw something with four legs and a tail dash up the wall at 100 miles an hour. “Oh my God, a lizard!” I yelled in English, slamming the door behind me and running back to the bed. Now, Markus and I normally speak German with each other, but apparently when I am surprised by lizards in my bathroom, my native language makes itself known. A good thing to know about one’s self. Needless to say, I took a very fast shower that night – lizards are fine outside, but when they might run over your head when you are sleeping, well, that would make anyone speak English, wouldn’t it? 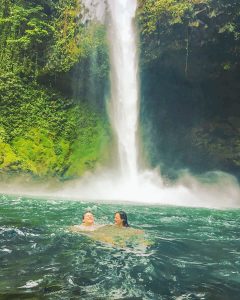 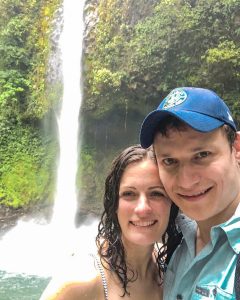 One of my favorite things we did in Costa Rica was swim in the La Fortuna Waterfall.

The next morning, the hotel provided us with a delicious breakfast (watermelon, pineapple, papaya, so much fresh fruit!) on their plant-filled terrace, and, filled up with citrus, we headed out on our two-hour trip to the Arenal Volcano/rain forest region. Side Note: If you’re going to Costa Rica, it’s best to rent a car – there’s not great public transportation, and you’re going to want to see a lot of different places scattered throughout the country. A few hours later, we pulled into our hotel, Lomas de Vulcan, and our jaws dropped. 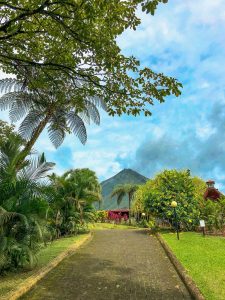 View of Arenal Volcano at our Hotel

It felt like we were on our honeymoon – well, we got married twice, why not have two honeymoons? We had no idea the hotel would be so fancy – a private bungalow just for us, surrounded by rainforest, with a beautiful view of a perfect cone-shaped volcano. After a major eruption in 1968, Arenal Volcano apparently spewed lava on a regular basis, until it eventually went dormant in 2010 (Markus was surprised to learn that the word “dormant” can be used for volcanoes – being very good in IT English, he thought it was just for hackers lying in wait). So while we weren’t too nervous about it erupting the two nights we were there, we did get to enjoy looking at it every day. 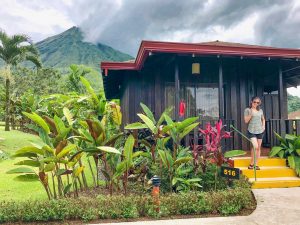 The best part of the Arenal region, however, was the animals. Costa Rica is home to five percent of the world’s species, and we got to see a lot of them. But our favorite were the sluts – I mean sloths (If you don’t know the story, check out Markus’ and I’s conversation ca. 2015, regarding our friend Keri’s Instagram post). 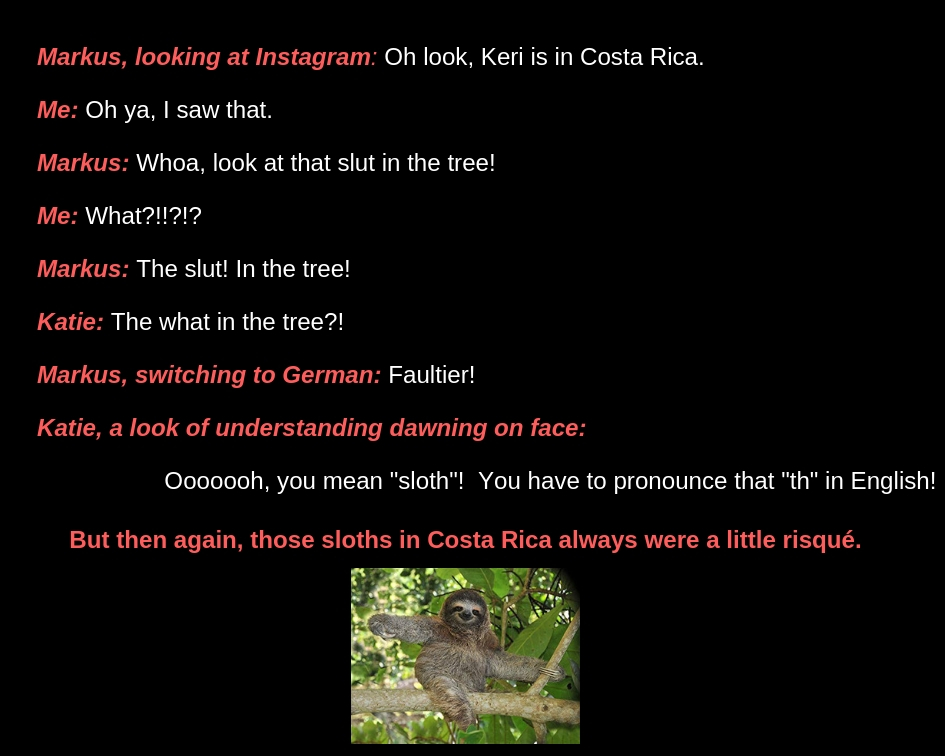 To see the sloths, we booked a sloth tour with Callidryas Tours, and it was absolutely amazing. When I pictured a sloth tour, I’d imagined we’d go deep into the rain forest and walk around, but no – our guide said the sloths were actually right there with us in town. You just had to know where to look! So he drove us to a roadside patch of forest, got out, stared up at the trees, and – “Look, a sloth!” We looked, and saw nothing. Leaves and branches, leaves and branches. But then he pulled out the telescope, and used his laser pointer to show us what branch to focus on, and suddenly, the cutest little guy imaginable appeared before our eyes – a sleepy little sloth, blending right in with the branches. We learned that sloths only weigh four pounds, and have hollow bones, so they can climb up very high and won’t get hurt if they fall. Throughout the tour, we got to see about 10 different sloths, and I can happily report that none of those sloths were acting slutty! 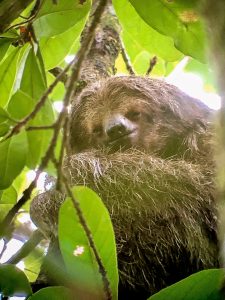 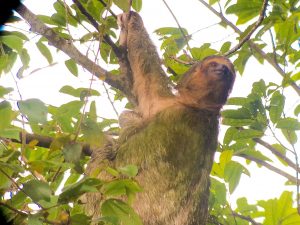 Slutty sloths aside, we did get to go deep into the rainforest the next morning. We did a three-hour hiking tour with Sky Adventures, making our way into the wild with a young Costa Rican guide who had studied the rainforest as her major in college. As we walked through the dense vegetation, we spotted leaf-cutting ants who were carrying leaves 20x their body weight, a venomous eyelash viper snake looking suspiciously innocent on a leaf, a rare owl sleeping in a tree, monkeys playing amongst the branches, a butterfly with transparent wings, and so much more. It felt like we were in a movie – especially when we had to walk across three-hundred foot high hanging bridges – images of George of the Jungle shouting “aaaah, aaaa-aaah” as he fell through the trees racing through my terrified brain.

This hanging bridge looks fine from here, but in the middle, we were incredibly high over the trees – and they wobbled! 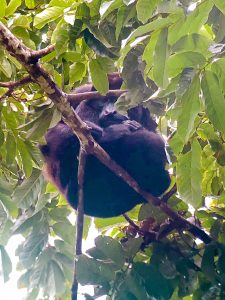 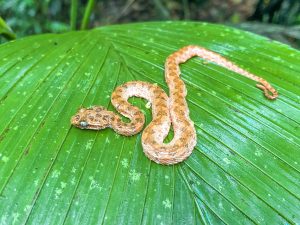 A monkey and an eyelash viper – check out its eyes!

Luckily, I survived the hanging bridges, and even more luckily, we got to see more animals!  One day, when Markus and I were hiking around by ourselves, we heard the fluttering of wings right – and I mean right – over our heads. We both ducked, then cautiously glanced up, and a beautiful toucan, with a purple and yellow beak, soared right past our faces. It was so bright! As a good American child of the ’90s, I of course then told Markus all about Fruit Loop’s Toucan Sam, which led to discussions of all the other cereal animals he was unaware of…no Tony the Tiger, no Cocoa Krispy Monkey, no “Silly Rabbit, Trix are for kids”…what kind of childhood do they have in Austria? A healthy one, perhaps… 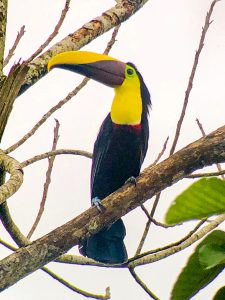 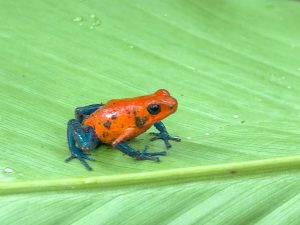 We saw toucans and this little red poison dart frog hiking on our own!

After three days in the volcano-rainforest region, we were ready to head to the beach! While the beach was only 120 miles away, the road-system in Costa Rica isn’t the best – not many direct routes – so 120 miles would take about 4 hours altogether. One too-strong coffee and subsequent having-to-throw-up-on-the-side-of-the-road later (during which Costa Rican teenage boys yelled out barfing sounds at me as they drove by), we finally made it to our hotel – Margaritaville in Playa Flamingo. 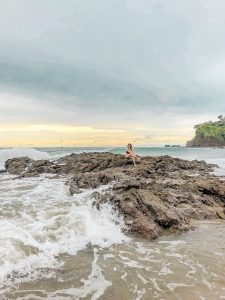 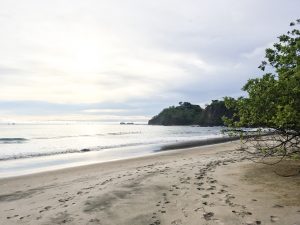 The beach was so exotic looking in Costa Rica!

Now, funny story about that hotel. The week leading up to our vacation, we still didn’t have a hotel for the beach part of our trip. We had been in Boston the week before, and I had a conference before that, and things just got crazy. So when Markus told me he had found a hotel named Margaritaville with beach access, I knew it would be touristy, but said that it sounded fine with me, especially as we were so late to book. I just assumed that Markus knew what Margaritaville was… 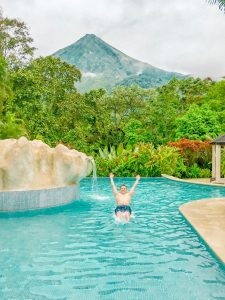 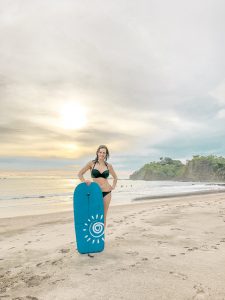 …but boogie boarding was really fun at the beach!

Fast forward to the two of us being in the pool at our exotic volcano hotel. I said to him, “This hotel is so nice and calm. Our next one is going to be very generic and touristy.” And Markus goes, “Why? I think it’s something local. It’s called Margaritaville.” Boy, was he in for a surprise…apparently Austrians aren’t familiar with Jimmy Buffet! 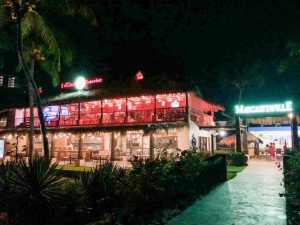 Throughout the course of our weekend there, Markus kept trying to remember Jimmy Buffet’s name. “Who’s the guy who sings the song you showed me? Jimmy John’s?” I believe he was also referred to as “Jimmy Trumpet” at one point. But after a few days of “Margaritaville” being played over the loud speakers, I don’t think either of us will forget Jimmy Buffet anytime soon. While it was mostly rainy at the beach, we still had a good time, boogie boarding, exploring the exotic beach, and (me) trying to speak Spanish. Gracias (look at that), Costa Rica, for a great trip – until next time! 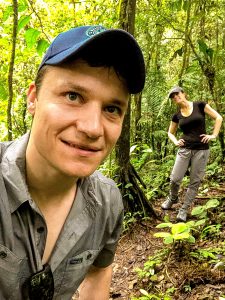 Ready for our next rain forest adventure!