Relationships are hard, but being in a relationship with someone from a different country presents even more challenges. There’s the language barrier, cultural differences, visa issues, and at least one of the partners has to adapt to life in a new country. As many people in binational relationships will tell you, those same challenges are also some of the most rewarding elements of relationships like ours.

I met my Brazilian boyfriend (now husband) while studying abroad in Spain. It was really fun to get to know each other in a place that was foreign to us both. There was no pressure to speak the language perfectly, as Spanish wasn’t the first language for either of us. We learned about Spanish traditions and culture together, ate all the tapas, and drank all the vino. 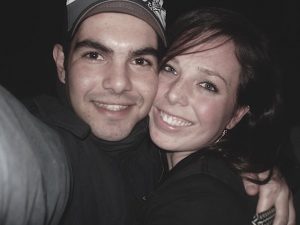 After spending a year together in Spain, it was time for both of us to go home. I went back to the US and he went back to Brazil.We decided to continue our relationship long-distance, not knowing all that was in store for us. We skyped multiple times a day for months. Being apart was so difficult, but it made us realize that we were willing to put in the work to be together. After six months, I got on a plane to go visit Tiago in Brazil. We spent a month relaxing on beautiful sandy beaches, exploring the tropical paradise, and hanging out with his friends and family. By the end of that trip, we were happily engaged and ecstatic to start our lives together!

I went home to the US and got to work on finding an immigration solution. The K1 Fiancé Visa seemed like the perfect option. After securing the visa, he’d be able to come to the US and we’d have 90 days to get married. We got started on the process right away. I filled out the application and sent it to the USCIS along with the filing fee.  A few months into the process, after another round of paperwork, a medical exam and fees, he was scheduled for an interview at the US Consulate in Rio de Janeiro, Brazil. I wasn’t able to be with him on the day of the interview, but we were very confident he’d be approved. We had mountains of evidence to show that our relationship was genuine. We had hundreds of pictures of our adventures in Spain and Brazil, passport stamps, Skype logs, emails, and letters to prove it.

I anxiously waited by my computer all day for him to call. When he finally did, it wasn’t the news I was hoping for. He didn’t get the visa.  We were devastated. (Hear all about the denial in Episodes 1, 2 and 3 of my podcast, Love Beyond Borders). We had to come up with a new plan – so we did.

Six months after his visa was denied, I moved to Brazil for us to be together. I didn’t know how long I’d be there. I figured it would be at least a year, but I had no idea how long it would take to get his visa situation figured out. We got married in a courthouse and got to work applying for my permanent residency in Brazil. It was a bit of a hassle, but nothing compared to the process for permanent residency in the US. 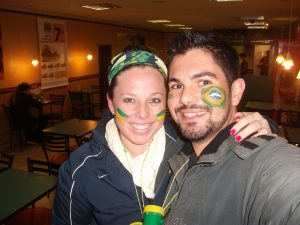 A Foreigner in Brazil

Life in Brazil was really hard. First off, I didn’t speak any Portuguese when I arrived. We were living with my husband’s family and I couldn’t communicate with them.They were so patient with me and it really helped that our niece was a toddler at the time. She was learning Portuguese right along with me and I learned so much just from playing and reading children’s books with her!

Finding a job was no easy task. In the small town we were living in, it was all about who you knew when it came to getting a job. I didn’t know anyone and despite my husband’s best efforts, not many people were willing to take a chance on me.

Everything was different. The food, the clothes, the houses, the showers, the toilets, the holidays, the education system, the traditions, the gender roles… I think I learned something new every single day.

I slowly realized that the year I spent living in Spain was more like an extended vacation. This new adventure I was having in Brazil was much more of a real-life experience living in another country. That also meant that I wasn’t shielded from the not-so-pleasant parts of life in Brazil. Wages were low and expenses were high. Making ends meet just to put food on the table and pay the bills was no small feat. Violent crime and corruption was everywhere which left me feeling extremely vulnerable and anxious almost all of the time.

As time went on, I learned more Portuguese, found a job and adapted to the culture and traditions. I learned to love so many things about Brazil in the nearly four years that I lived there. It was the hardest thing I’ve ever done, but also the most rewarding.

So where Are We Now?

My time in Brazil was rewarding because without those experiences, I wouldn’t be able to fully know and understand my husband. I now speak his native language fluently, know and love his family dearly, understand his upbringing, cherish his culture, and participate in his traditions. I know him on a deeper level because of the years we spent living together in Brazil and now he is experiencing the same things living with me here in the US. 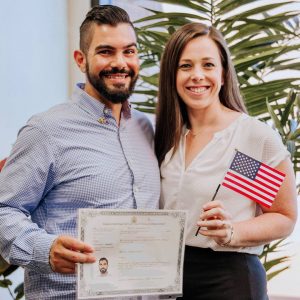 Having our visa denied was a traumatic experience and it felt like the end of the world at the time. The US immigration system is broken and there are so many families who suffer because of it. We are extremely lucky to have been approved for a green card after nearly five years of expensive fees, heartbreaking denials, and lots of red tape. But those years we spent waiting did not go to waste. They served to teach us to be strong and resilient through the hard times and grateful for all we have been blessed with. Binational couples experience many challenges that other couples might not even have to think about, but we also are rewarded with double the culture, double the language, double the traditions and double the fun! 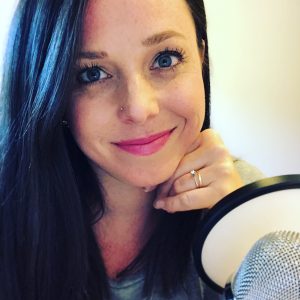 Kelli is the host of Love Beyond Borders; a podcast about immigration stories and intercultural relationships. Her passion for language and culture has taken her around the world and ultimately led to a career teaching English to adult immigrants and refugees in the Midwest. Tune in to the Love Beyond Borders podcast on Apple Podcasts, iTunes, Spotify, Google Podcasts, Google Play, etc. () and connect with Kelli on Instagram @kelli.fm