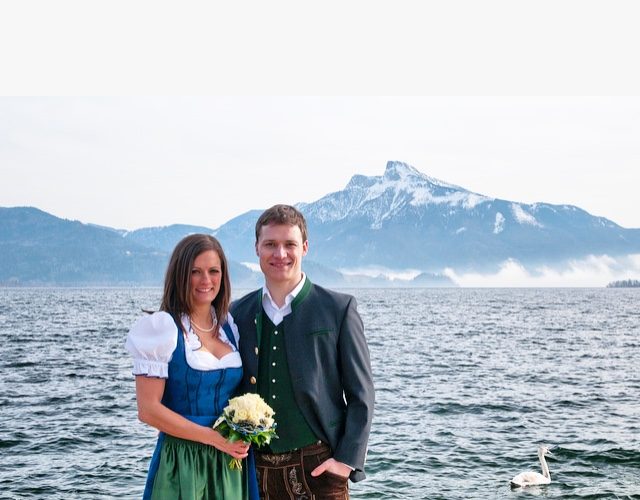 When I realized Markus had just secretly flown from Salzburg to St. Louis to propose to me back in 2013, various thoughts raced through my head: 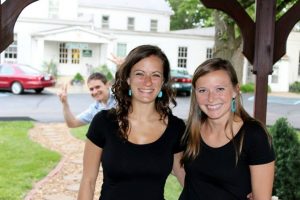 I thought Alex and I were just posing for a cute picture in our accidentally-matching outfits – had no idea Markus was behind me and not in Austria! 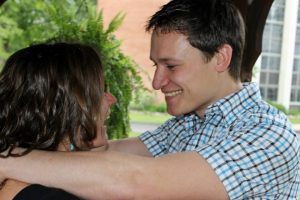 Once I got over my surprise, I was very excited he was asking me to marry him!

But amidst all those racing thoughts, I never once entertained the idea that when we got married, it wouldn’t be in St. Louis. I knew Austria was beautiful and everything, but for me, being with my friends and family was the most important thing. Little did I know what was to come…

After celebrating our engagement with our family and friends, Markus and I flew back to Austria together (I was living over there teaching English at the time, and had just gone home to St. Louis for a wedding). Upon our return to the land of the Alps, we got down to business. We were planning to move to America together sometime in that next year, which meant that Markus would need an American visa. And in case you are unaware, getting a visa for the good ole US of A is quite the complicated process.

While we originally applied for the “alien fiance visa” (yes, it is really called that), we soon realized that this wasn’t the best option for us. If we went that route, we would have to get married within 90 days of setting foot in America, and Markus wouldn’t even be able to start applying for a green card until after the wedding took place. And that application could take up to a year to process. However, if we got married before we went to America and then applied in Austria for the “spusi visa”, as Markus called it (I laughingly corrected him on the word “spouse”), he could start working right away. But we could only apply for the Spusi Visa in Austria as long as I was still a legal resident of the country. Which was only until February 21 – three weeks away.

“So, can we do it?” Markus asked me earnestly. “We’re going to get married soon anyway – we’ll just do the legal wedding here now and then a church wedding in St. Louis with your family and friends later on.” I felt my stomach drop. Get married twice? And the first one in three weeks? Here, in Austria, without any of my friends and family by my side? I was nowhere near happy. “I don’t want to be already married when I walk down the aisle in St. Louis,” I told him anxiously. “That would be so weird.” Markus, however, didn’t really understand. In Austria, everyone gets married twice – they are legally required to go to the Standesamt, or city hall, and get married there before doing a separate church wedding. Some couples do both weddings on the same day or the same weekend, and some wait years before completing the church wedding. So he didn’t get why “being married before getting married” was such a big deal to me. “It just makes so much more sense for our plans, Katie,” he pleaded. I reluctantly gave in. “Fine”, I said, “but we’re going to make these two weddings as different as we possibly can.” 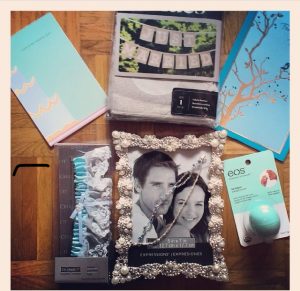 My friends from home knew I was feeling sad, so they sent me some little wedding presents to cheer me up – I wore that garter in both Austria and St. Louis!

And we did. We decided to get married in Tracht – the traditional Austrian clothes of dirndl and lederhosen – which was perfectly acceptable for an Austrian wedding. I also said that I wasn’t going to change my name until we got married in St. Louis, and I didn’t want to exchange wedding rings. And I wanted to keep this wedding small and intimate – the bigger wedding would be at home. We decided to invite just his immediate family, grandparents, and best-friend cousin. If only my family could be there… 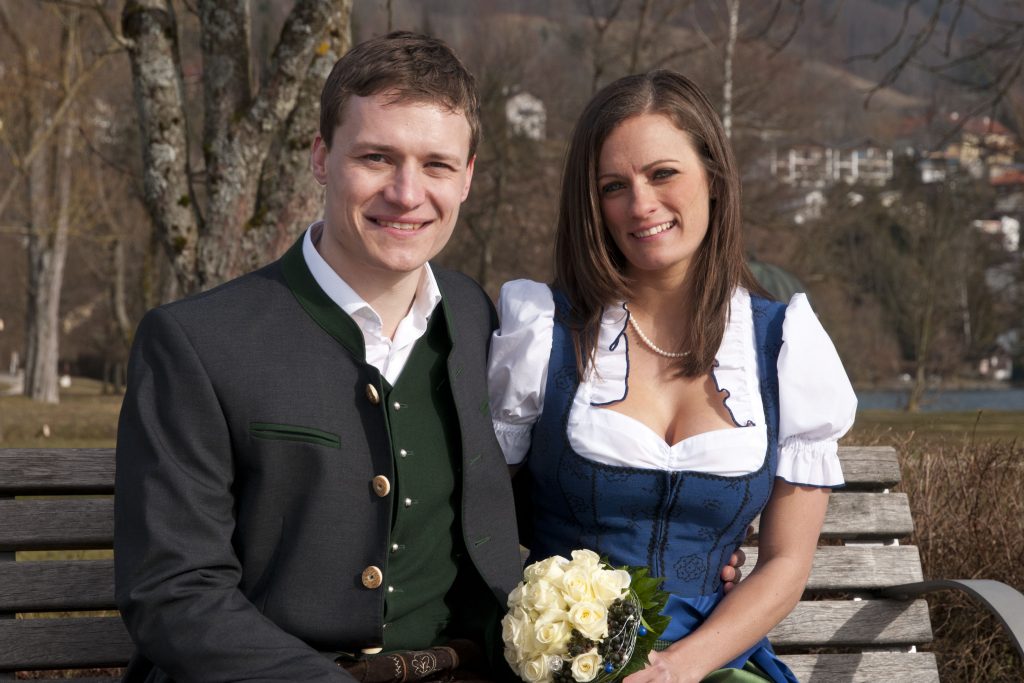 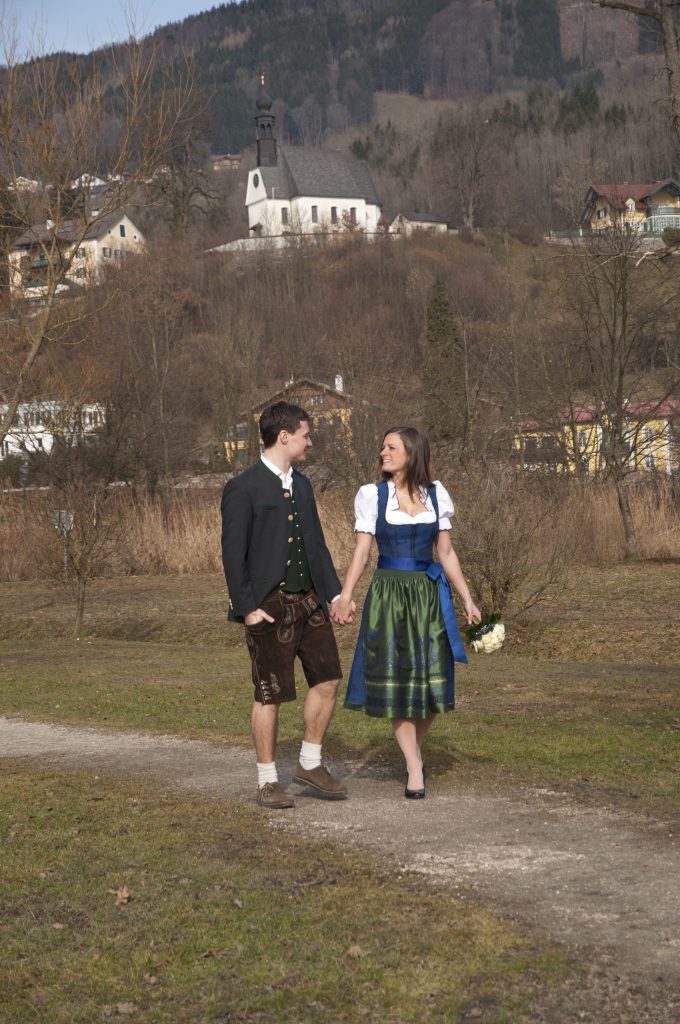 We got married in Tracht – traditional Austrian dress

Luckily, I have a great mom. A week later, sensing my sadness, my mom skyped me and told me that she and my brothers would come to Salzburg for our wedding! With the knowledge that my family would be by my side, I finally let myself get a little excited about planning an Austrian wedding.

Markus and I had set the date for February 18, 2014 – a Tuesday – because that was the farthest-out date that would work before my Austrian visa expired on February 21st. The next two weeks were then a whirlwind of bureaucracy and planning. And before we knew it, the big day – and my family – had arrived.

We had chosen to get married in Mondsee, a picturesque lakeside village a little outside of Salzburg. Much to my joy, Mondsee is the home of the church where Maria got married in Sound of Music. And the city hall where we were getting married just so happened (coincidentally, I promise!) to be situated in a beautiful castle that was connected to that church. So the location was perfectly fine with me. 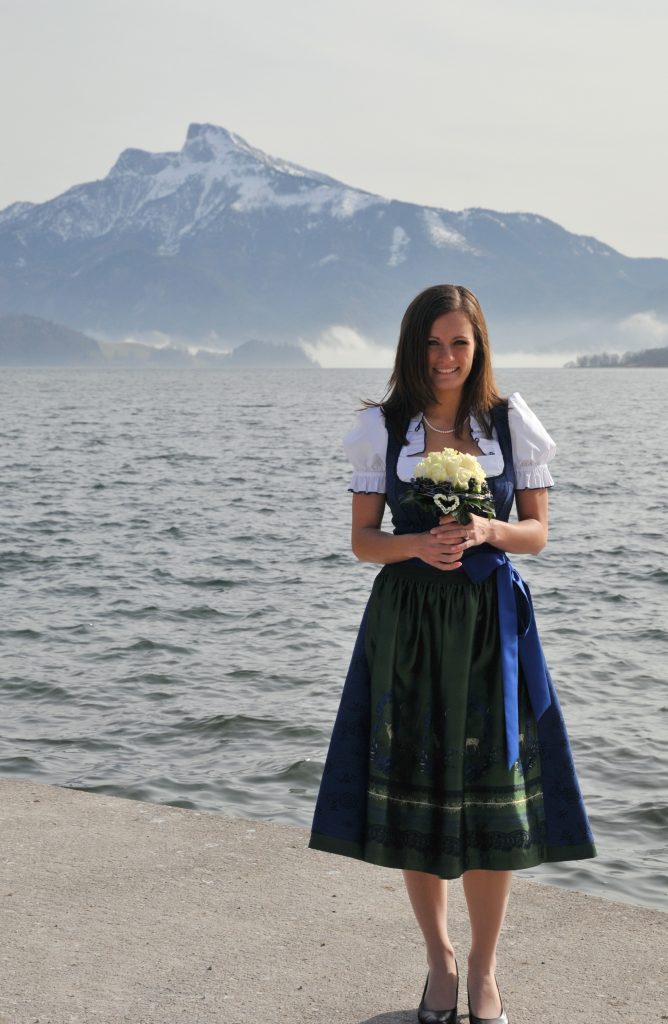 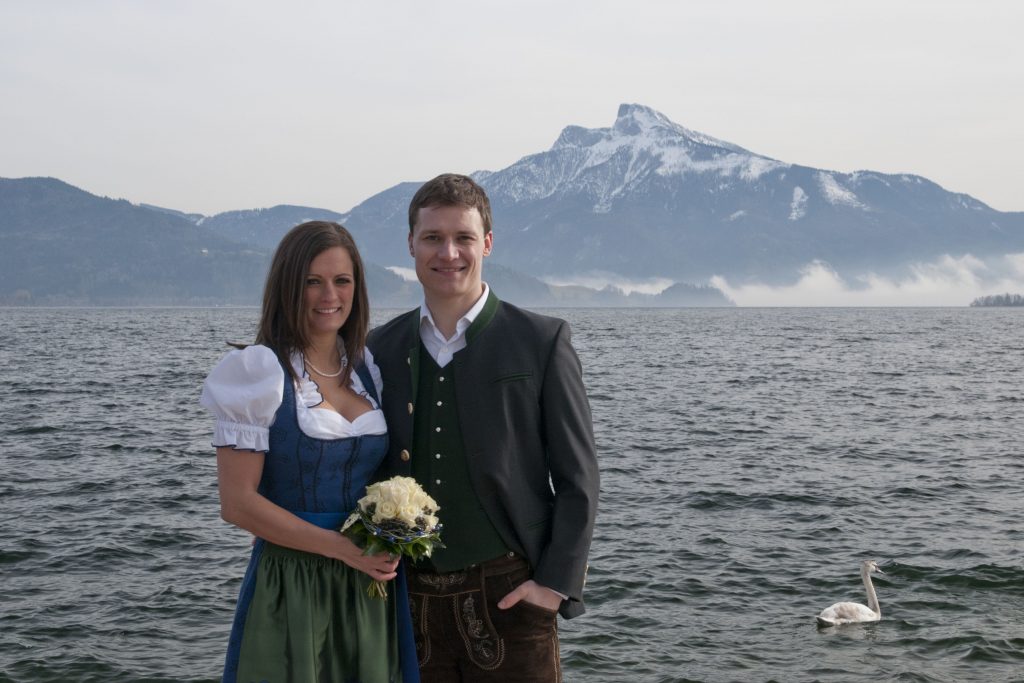 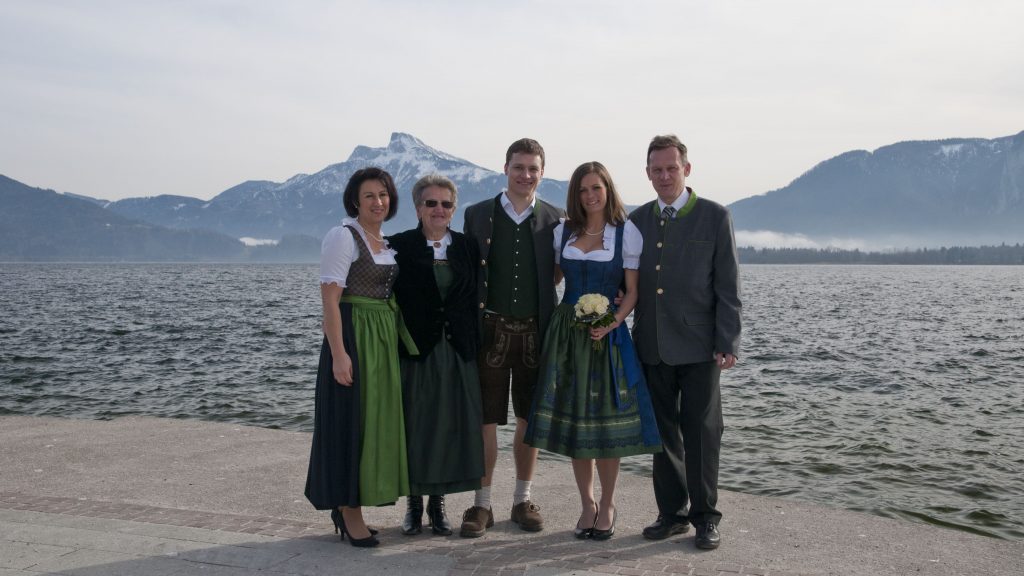 After a freezing cold photo shoot by the lake, in which my entire family was also decked out in Tracht, we went to the city hall. For those of you who know me, you may have thought I was very excited to have a wedding in German, but I was actually very nervous – what if I misunderstood something? Or answered something incorrectly and messed up the entire ceremony? Luckily, my German is better than my self-confidence suggests, and everything went smoothly…although I can’t say that the officiant was always the happiest with us.

Why not? He was not as on board with my “this wedding is going to be a very mini-wedding” plan. After the vows, in which we each expressed a solid “Ja!” to give our consent to the marriage (“Yes”, instead of “I do”), he said, “Well, normally, this would be the time to exchange the rings, but since the couple isn’t doing that, I guess we’ll move right along…” (Ok, dude, sorry). And then, at the end of the wedding, when he was congratulating us, he said, “So, you aren’t changing your name now, but you are going to do it in America, right?” Much more of a traditionalist there. 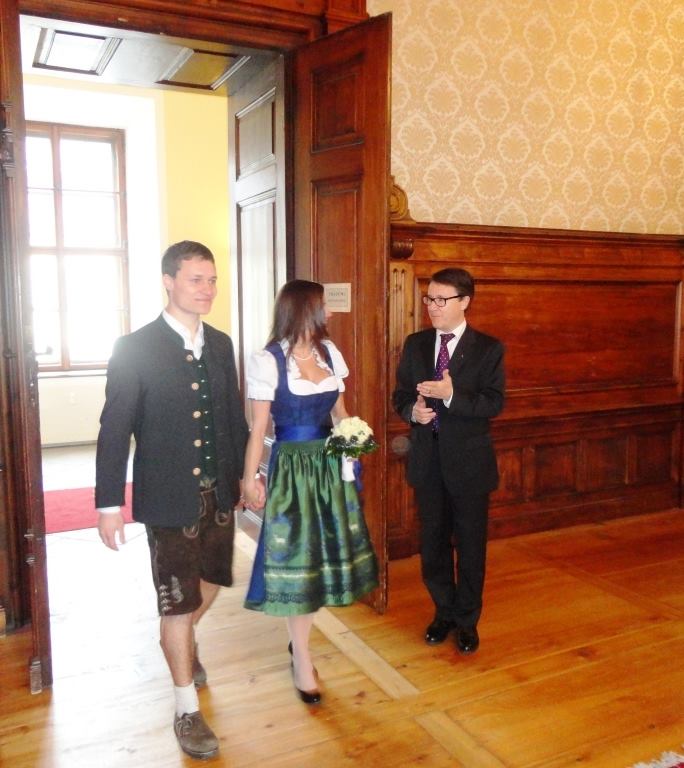 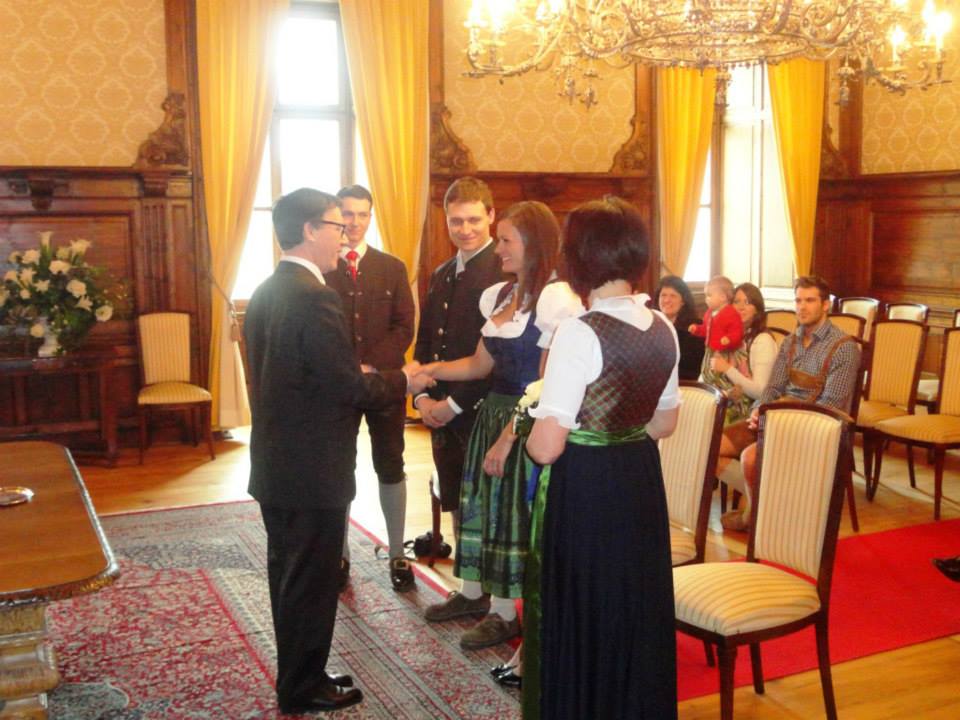 The officiant shaking my hand and getting my promise that I would change my name in America.

Another interesting aspect of the wedding was the music. Since many Austrians don’t speak English, they don’t always listen to the lyrics of the songs they play at weddings. Last May, I attended an Austrian wedding in which they played Colors of the Wind from Pocahontas as the bride walked down the aisle. I was cracking up to myself, thinking, “I am probably the only one in church right now who knows the words are “Have you ever heard the wolf cry to the blue corn moon, Or asked the grinning bobcat why he grinned?…” Very wedding-like, the bobcat. In any case, we got a list of some pretty great song choices to choose from, and while I didn’t go crazy, I did throw in “Can You Feel the Love Tonight?” to give my brothers a little chuckle during the ceremony. Always good to have Timon and Pumba with us as we get married.

After the ceremony, I did what any self-respecting Sound of Music fan would do. I took Markus by the hand, and marched right over to the Sound of Music church next door. With my mom and I directing, we told Markus how to stand exactly like Captain von Trapp did in the movie, up on the steps, and I pretended to be Maria coming in at the bottom. It was the actual church, after all! The highlight of the day was when some American tourists visiting the church on the Sound of Music tour came up and asked if it was really our wedding – they were very impressed, and I felt very cool. 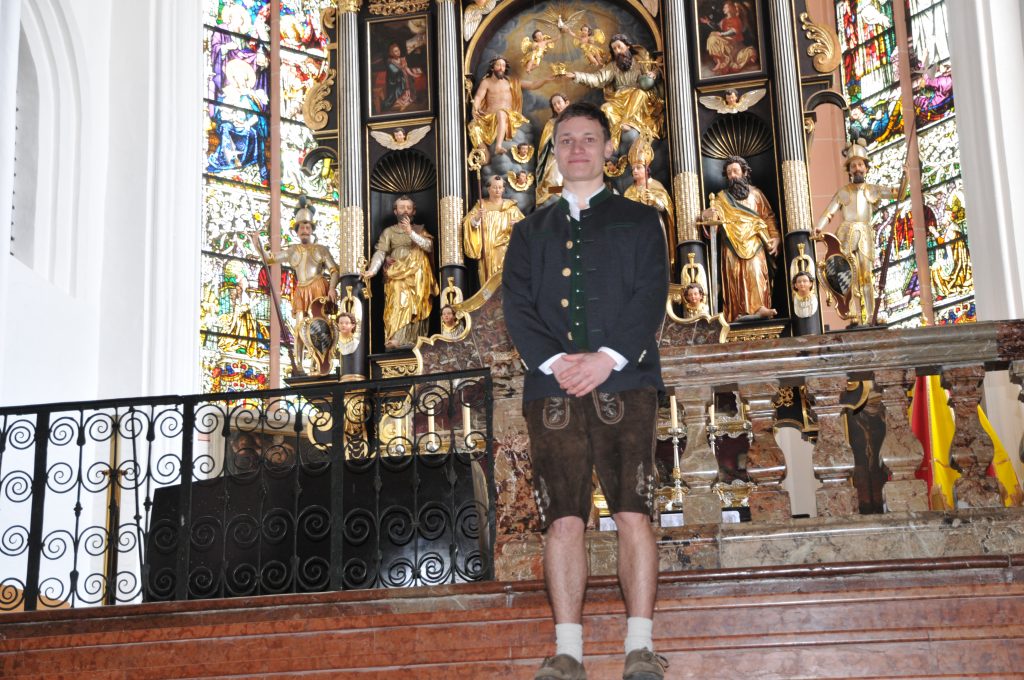 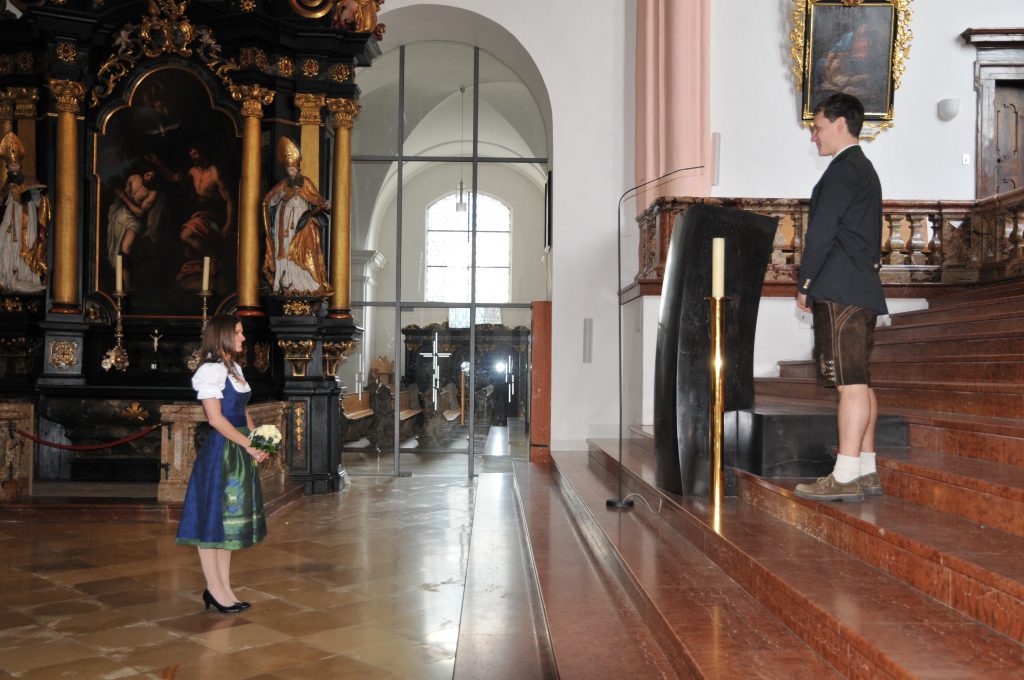 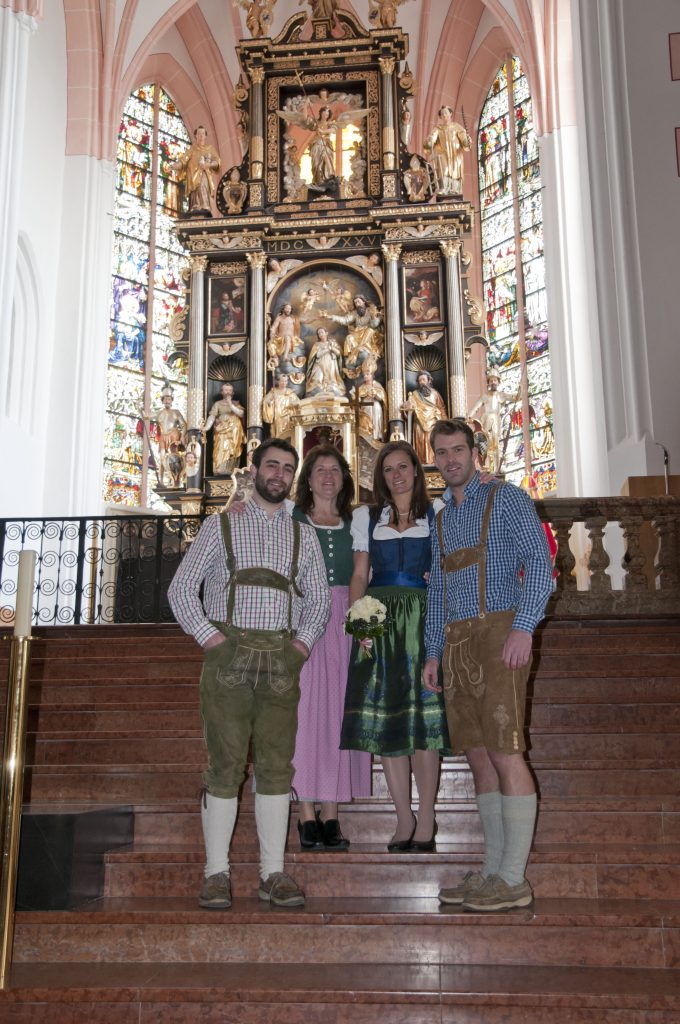 Pretending to be Maria and Captain von Trapp, with my Family Directing the Process

After playing pretend, we then went on to our reception – at a a beautiful restaurant in the castle. My new mother-in-law had gone all out, having handcrafted beautiful decorations that looked like something off  a Pinterest board, and three cakes made just for us. One of my favorite parts of the dinner, however, was when my brother, confused by the European double-kissing custom, went the wrong way when greeting Markus’ 80-year-old grandma and accidentally met her in the middle – planting a big kiss right on her lips. Both were a little shocked, to say the least! 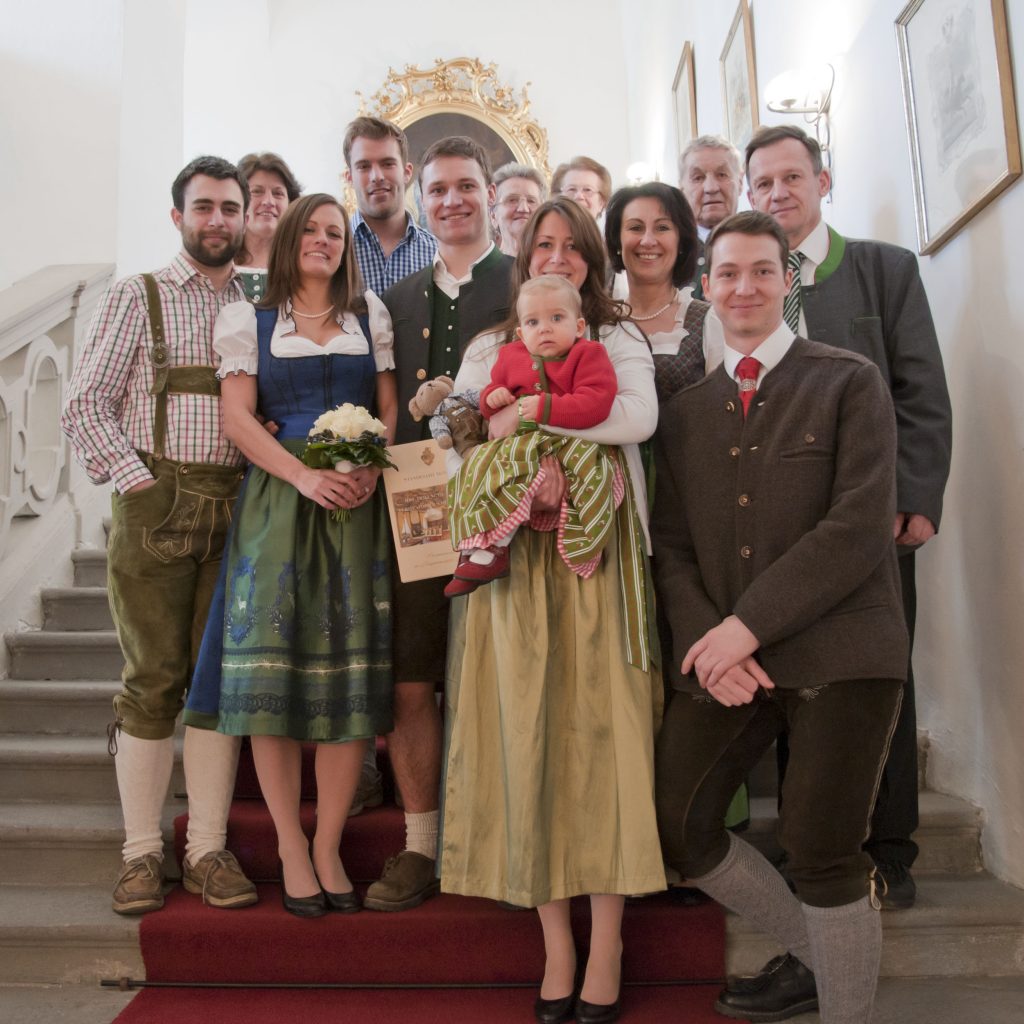 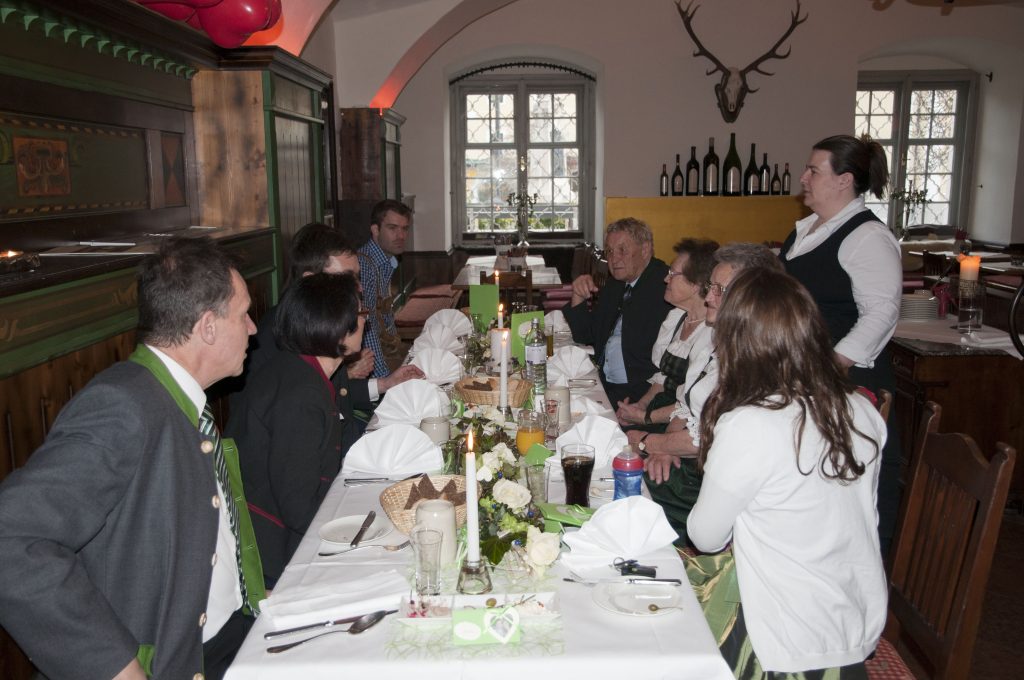 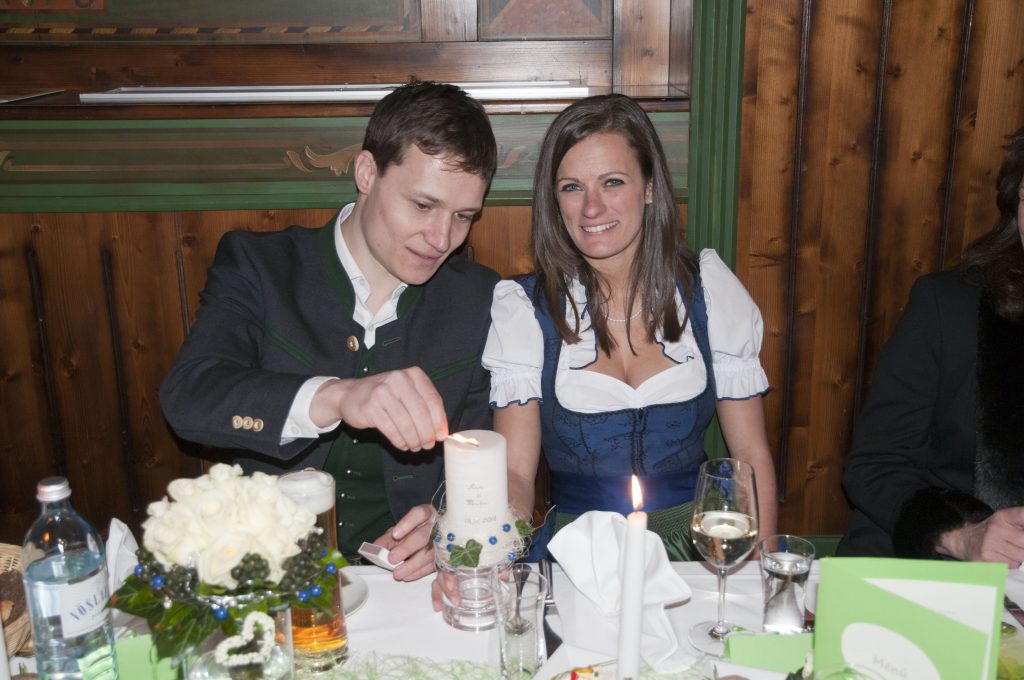 Celebrating with both families afterwards was a lot of fun.

Needless to say, what started off as a sad thing for me turned into a beautiful day with both of our families coming together. However, we did confuse many a new acquaintance that next year when we moved to Boston – with one wedding behind us, and one wedding still to come, I would catch myself saying sentences like “This is my husband Markus. We’re getting married next July.” I also started calling him my “half-husband”, which confused people even more. A little chaotic, but it worked. When my cousin Carolyn was trying to cheer me up in those first days of wedding planning, she said to me, “Just think. You can tell your grandkids that you loved Grandpa so much, you had to marry him twice!” You know what? I think I will. 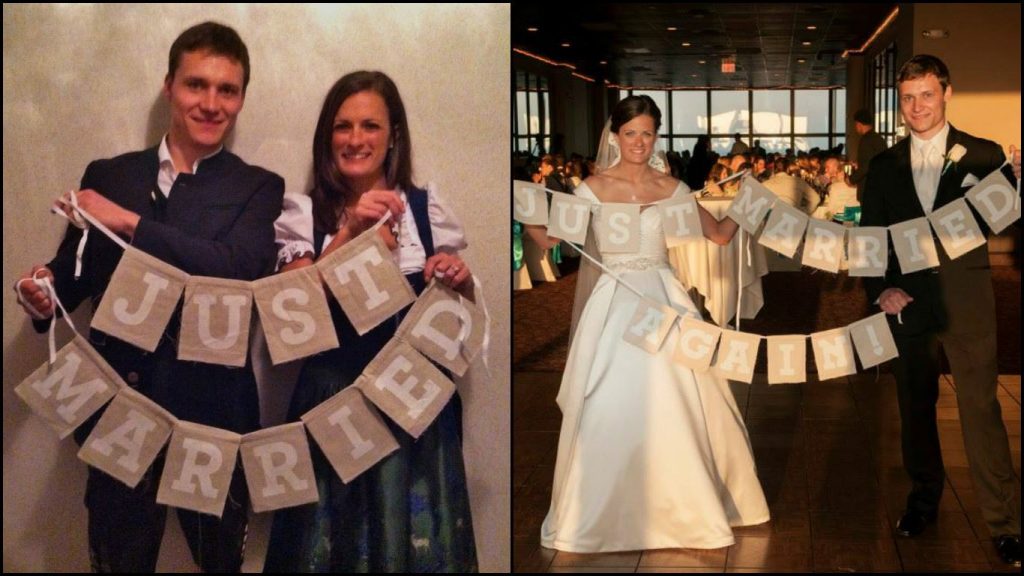