As a child growing up in St. Louis, Missouri, I was utterly fascinated by foreign languages and cultures. I would continuously fantasize about life in other countries and covertly follow any person speaking a foreign language around town for as long as I could. This childhood interest (and slight stalking tendency) eventually turned into getting my Master’s Degree in the German language at Bowling Green State University, a two-year program with the first year in Salzburg, Austria, and the second year in the not-as-glamorous Bowling Green, Ohio. Not glamorous, perhaps, but the town where I would meet my future – and, perhaps not surprising to you – foreign – husband.

My future husband was from a small town near Salzburg, although we had never met when I was there the year before. He was studying abroad in Bowling Green, and we met at the German Department’s Oktoberfest (too cliché?) through a mutual Austrian friend. After I graduated, we both moved back to Austria, me to teach English with the Fulbright program and him to get his Master’s Degree in computer science. We lived in Austria for the next three years, one of which included our Austrian wedding in the beautiful town of Mondsee. In 2014, we decided to move back stateside, had a big American wedding (doesn’t everyone get married to the same person twice?), and eventually ended up in Boston, Massachusetts, where I am a German-English translator and he is a software consultant. 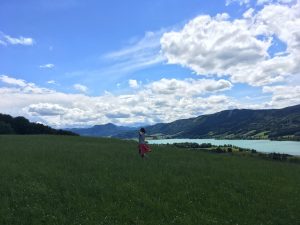 The hills are alive in my husband’s Austrian village!

Between the two of us, we have both lived for years as a foreigner in the other’s country, grappled with the other’s language, and struggled with understanding the other’s habits and customs. Merging two lives can be hard for any couple, but throw two completely different cultures in the mix, and you get scenarios you would never have dreamed of. On top of that, we also decided to be digital nomads, traveling and working in different cities around the world. This blog will be the story of all those aspects of our lives – funny (and sometimes embarrassing!) stories of our language mistakes, of culture shock for me in Austria and for him in America, our travel adventures, and of trying to merge our Austrian and American cultures together in a way that somehow, possibly, maybe works. Be sure to sign up for our newsletter at the pop-up on our homepage to get our latest language laughs and travel adventures straight to your inbox – we’d love to have you as part of our community!